First up, Apologise for letting this slide guys. When my Mother passed, many things seemed unimportant, but as life got back to normal, this blog just got forgotten about. Its a good thing Tom gave me gentle nudge

Right, With that out of the way,, its time to pick up where I left off. Now as it happens, this trip report was written just a few days before my Mother passed, so, it's a little out of date. so don't expect cool cloud shadows and such. Getting on with it then.....

With the fuss of the first flight over, I was determined to get the second flight right. So on a nice early afternoon in Inverness I got 'Charlie' (yes Charlie. That's the unoriginal name that suggested itself and she's certainly seems happy with my choice) ready for the four hour plus flight to Iceland. The first thing I did was to call for the fuel truck to make sure I had enough fuel for the trip. Topped with 1000lbs of avgas, I felt a lot better for the upcoming trip. In Theory this would give me 6 hours of endurance.

My plans today involve a touch and go at Wick. Call it unfinished business. I also plan on breaking the trip with a bit of lunch at Vagnar in the Faeroe Islands. All that was to come though. With Charlie's engines running I taxied out to runway 23 and prepared to leave Scotland. The weather today is much nicer than expected with just some fluffy Clouds and a light wind to worry about. I'm hoping this stays with me for the whole trip, but I'm not holding my breath. 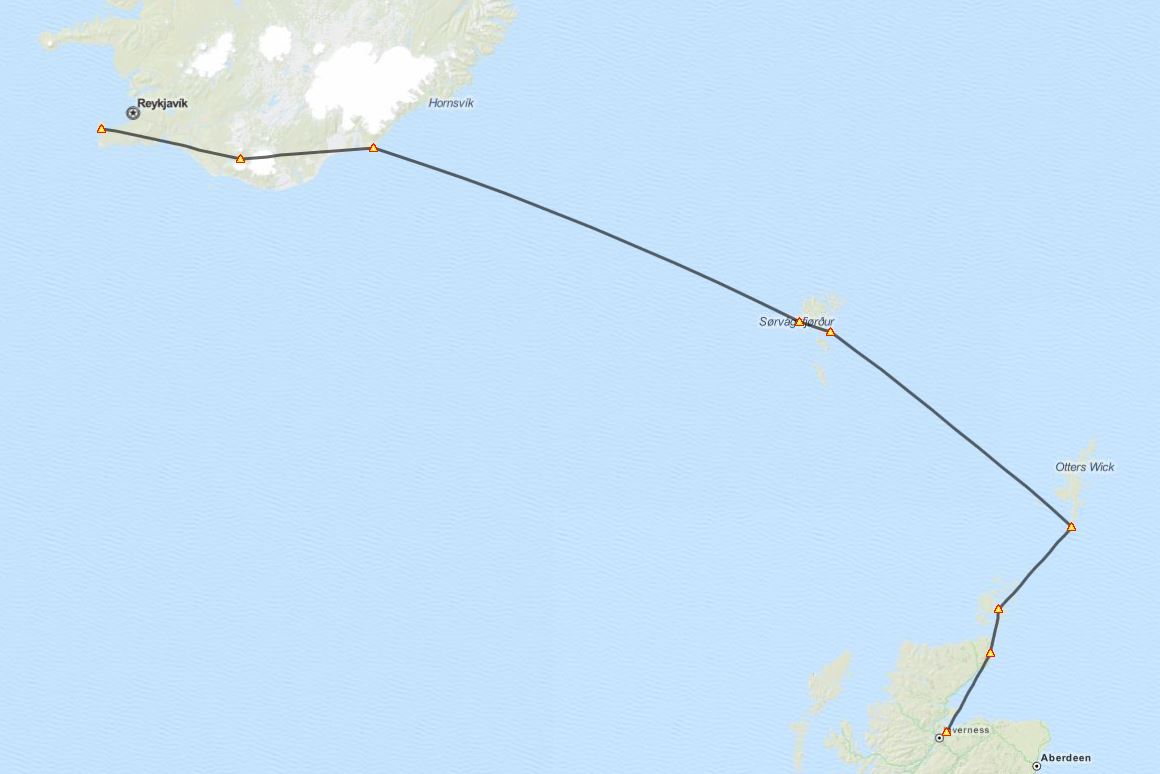 Leaving Inverness I turn on course with Wick's VOR and settle into a cruise at 7000ft. The trip is only half an hour and the clouds cover much of my view.

Every now and again I get a glimpse of the coastline off to my left. Soon enough I begin a slow descent for my touch and go at Wick. I turn onto final and perform a nice lick of the runway surface before its wheels up and a climb up to 15000ft.

I want to get up as high as I can to enjoy a faster cruise. It'll be a few hours until I'll need to return to earth. With Wick disappearing behind me, I say goodbye to the mainland and start out to sea. This is where the real fun starts. Below me I overfly the various islands that make up the Shetlands. Kirkwall passes quickly and I'm off to the last Scottish waypoint. Lerwick marks the end of Scotland and I start my turn out to the west and the Faeroe's. This leg is a hour at cruise and Charlie and I settle in for the longhaul. The weather has continued to behave and fluffy white clouds sit below me. There's not much to see out this far north. An occasion island passes the window but little else. So I busy myself with instrument sweeps and checks.

The hour passes and I'm soon descending towards the desolate North Atlantic Faeroe Islands, home to a big fishing industry, but little else. I'm feeling the need for a break and I'm more than pleased to see the airport off to my right. I continue downwind and Land at Vagnar. Its a surprisingly beautiful approach and in the bright sunshine I taxi to the terminal for a leg stretch and lunch.

The Faeroe Islands are a place I've never been, but I so glad I landed here. The freeware xp9 scenery works perfectly. The weather however is blatantly wrong. Checking plan G as I approached the Islands, I expected 6000ft visibility and rain. Obviously XPX's weather downloads don't cover this area. Its a shame and I remind myself to install the noaa plugin to help with the weather downloads

I Depart Vagnar I begin the longest leg of this trip. Leaving the Faeroe's behind, it'll be a full hour and a half until I see land again. For the time being I relax and return to 15000ft. The wind has turned from a nice tailwind to a bit do a headwind and all to soon, cloud returns beneath me, though gone are the nice fluffy clouds to be replaced with near full overcast underneath. At least up here the sun is out. The weather radar paints a picture of rain below.

It's not to long until my VOR sparks to life and I find myself just 160nm or so from land. Up until now I've been on a heading only, so the reassurance of a proper navigation aid lifts my mood. My happy mood doesn't last though. Shortly after passing over the coast of Iceland, my left engine unexplainable coughs and stops. With last flights fuel cock up now at the front of my mind, I quickly check the gauges. This time, there's plenty of fuel in the auxiliary tanks and I'm puzzled by the issue. I try to restart the engine with no success. I check the electronic fuel flow gauge and notice that despite the fuel pumps being on, the left pump reads 0. I assume the auxiliary pump has failed and I switch back to the main tank where I was saving a couple of Lbs just incase. I retry the engine and this time she purrs into life. With a problem on board I look for my nearest airfield only to find Keflavik to be my nearest. The engine out has also cost me height. I'm down to 9000ft, but with the left engine running, things are not to bad. The broken pump though has left precious fuel in the left auxiliary tank, and I can't use it. So for the second flight in a row, I'm watching the fuel gauges hoping to make it. There's cloud all around me and below, signs of life, sort of. Vast glaciers cut through the landscape. Its eeriest beautiful.

Soon Keflavik is on the nose and I've had to switch the left engine to the right fuel tank to get me here. The needles are still perilously hovering near zero. It's all ok though and I pass over the threshold and on to Icelandic soil safe and sound. I taxi to the apron and shut Charlie down. A quick chat with a local mechanic and I find my faulty pump to be little more than a blocked fuel vent in he auxiliary tank. Its quickly fixed and the mechanic promises to give Charlie a good clean once I'm gone. It's been a long day and I'll need a long rest before I tackle the next leg to Greenland. So off to the Capitol for a Bacardi or three and a some rest.

The engine failure really threw me, and I mean that in a good way. It turns out that I have' random' failures set in the failures menu. It's very lifelike given that this aircraft isn't that new and from what I've seen, faults like this happen all the time.