Finally cleared up my development commitments and made it through a successful FSDevConf so I was able to focus on getting the sim set back up to fly the SkyMaster again. I got a great deal on LatinVFR's Key West scenery from a sale on SimMarket so I decided that would make for a nice shakedown cross country flight before I headed off across the open sea to the Bahamas. The scenery is overall very good, but it does have a certain lack of quality that makes me glad I didn't pay full price for it. There are several very visible seam lines in the photoreal textures and the textures themselves change quality from sharp to blurry in various areas. A portion of a bay area even shows landclass textures through the water instead of a sea floor. Even the airport AFCAD had a bug in it where aircraft would taxi straight onto the runway and pile up without holding - I had to modify the hold short node position to get the proper behavior. I also added a bunch of additional boats to wake trails that were empty on the photoreal water textures. But again, it's way better than default and even has night textures so I'm satisfied with the price I paid for it.

Anyways, the flight down from Miami to Key West went very well. There was some rain bands moving through the area and I got caught in one for a few minutes about 1/3 of the way down the keys but other than that it was just some low cloud cover I had to avoid. Taking off from Opa Locka (KOPF) I was able to depart straight out to the east and turn south along Miami Beach. I used the Dolphin VOR to stay 14nm distant and remain outside of the Miami Bravo airspace - the floor above me was 3,000 and I was at 2,500 and within 13nm the floor drops to 1,500. So a bit of DME arcing to the tip of Key Biscayne and then I was free to just follow the coast of the Keys the rest of the way down. I did my best to remain at 2,000+ for the first few keys as that was over a wildlife refuge area marked on the charts. I did have to drop to 1,000 feet as I got further south to avoid a drop in the cloud cover.

I had timed the flight so I would arrive at sunset but I forgot to adjust the time in FSX to account for DST - I need to advance the FSX clock an hour ahead of the actual time to get the proper lighting in the sim. So as I approached Key West and the sun was still above the horizon I went and bumped the time up to sunset. I followed the Overseas Highway since that took me around the naval base and set me up for a downwind entry into the pattern for runway 7 at Key West International (KEYW). I was a little rushed getting configured for landing so I missed looking back for my turning point to final and swung wide and had to S-turn back to line up for landing. Touchdown was pretty good - although like last time I got a little wobbly and came down rear left, rear right and then dropped the nose. I think I just need more power when I land. 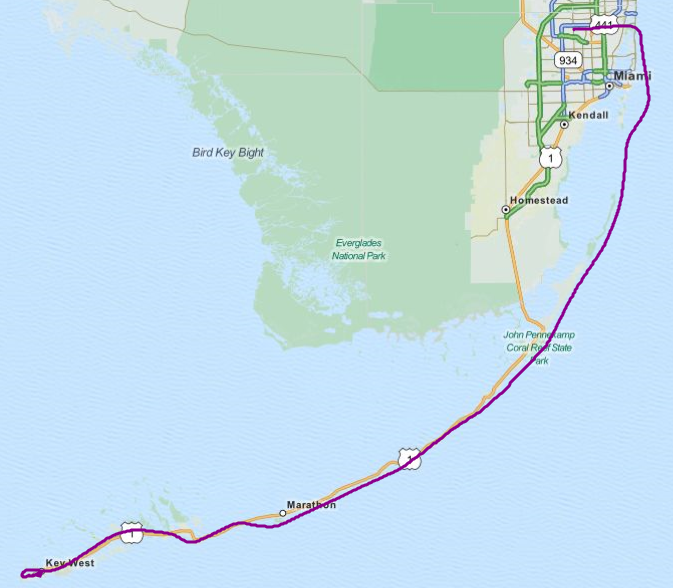 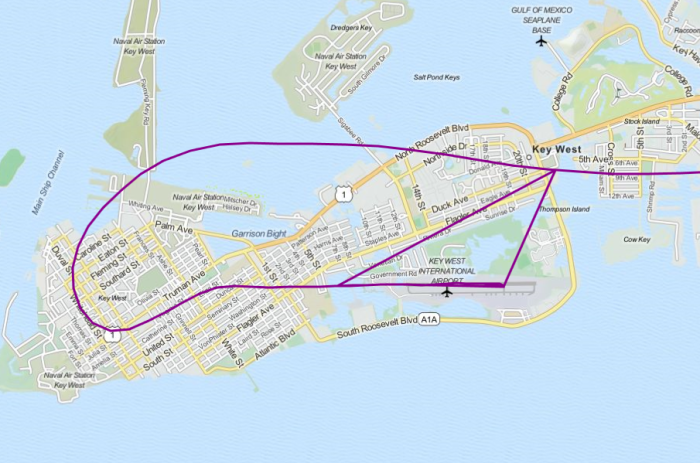