So my original plan after Buffalo was to continue working my way west and head towards Chicago. But then I up and purchased FS Global ULTIMATE - The Americas as I have mostly flown with nothing but default MSFS mesh (the only exception being a 5m mesh over parts of northern NJ). So with some hi-fidelity mesh installed I had to fly over mountains and the closest were the Adirondacks in upstate New York. So - where could I fly to around that area? To help me there I headed on over to the Virtual-Dispatch scenery database which is the most comprehensive collection of airport sceneries I've yet found that is easy to search and see what airports are in what area. If you know of any that aren't listed it's really easy to add some so definitely do so! Anyways, I found KGFL in Glen Falls that would be a perfect destination and started working my route. I decided to simply fly along the Lake Ontario coast, turn inland around 20mi south of the Watertown VOR and just cruise around the mountains until I picked up the Glen Falls VOR and use that to track to the airport from wherever I ended up. The one problem I knew I might have was weather - it was nice in Buffalo when I departed but the report for Glen Falls was fog all morning. So I made sure to keep a list of alternates ready.

I should mention this was the second attempt at making this trip - the day before I tried after flying the helicopter around but just as I was leaving the Buffalo area some strong turbulence hit and ripped my aircraft apart again. So that put me off flying for the rest of the day. When I came back for this second try I just disabled completely the "Clear Air Turbulence" setting in AccuFeel - screw it. Not worth the trouble. Before departing KBUF airspace the other day though I did one touch and go since the wind was calm - it still worked fine the way I did it with the headwind on my last flight. Sweet. So the flight went well until I reached the mountains. Flying over the lake I was able to climb through a gap in the scattered cloud cover to FL050 around Rochester since I wanted to cut across the bay and stay out of Charlie airspace - so extra height would help me glide to shore if my engine failed. I waited until I was outside of an MOA with a floor of FL040 - technically I could fly in it and just stay tuned to the proper control frequency but since FSX doesn't simulate any MOA activity I just try to avoid them. When I am forced to fly through I simply set my radio to the proper frequency. Anyways shortly after I hit the westward edge of the Adirondack range the weather closed in to conditions that were less than ideal for flying through mountains - I probably could have forged on but always better to play it safe. Fortunately at the time I was just flying by Piseco Airport (K09) so I quick entered the pattern there and put the plane on the ground. Live to fly another day - that's a good motto. Hopefully the weather clears up soon! 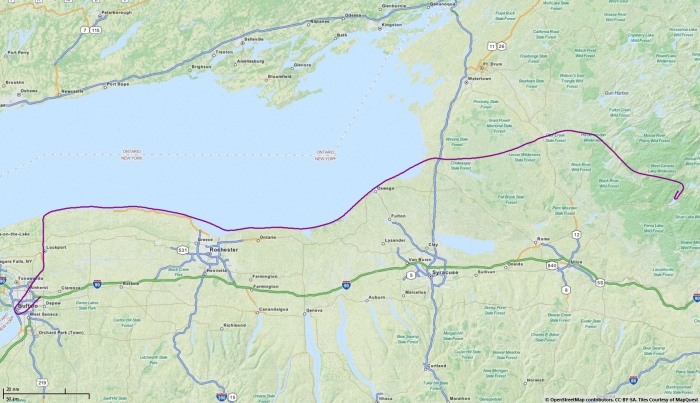