This took a few days to happen thanks to the weather, and even still when I climbed into the cockpit it was with the expectation that I would probably be turning around after my first planned leg, but there was a chance things would clear up enough for me to continue on by then. Wind was light mainly from the north so I was able to takeoff in the direction I wanted to head in initially, with a straight climb out to about FL016 as clouds were reported to be at FL021. I was able to stay low by flying first along Lake George and then over some lowlands at Ticonderoga and then along the waterway separating New York and Vermont. The clouds stayed low the whole time as expected.

Eventually I needed to turn west, at the 286 radial to Saranac Lake, but when I got there the clouds had become even lower and although they were scattered they were huge puffy clouds that I couldn't see around, so I pulled a 180 and started heading back - but then I noticed the overcast ceiling above me had become broken and huge hole was inviting me up. So I quick tuned in and got flight following from Burlington Approach and began to climb through the hole to get above the clouds. Now, climbing over clouds is a tricky business and my decision to do so came mostly from the type of aircraft I was flying which could handle the altitude. It's impossible to know (short of a PIREP) how tall clouds are until you are up over them, so climbing over does not always work. Fortunately in this case the clouds topped out around 6-8,000 feet and I continued up to FL100 just to be sure and also just because I hardly ever have an excuse to fly that high! On the way up I forgot to lean the mixture (which was already halfway lean for general cruise) and it was noticing the cylinder head temperature rising that got my attention - I thought the fading sound of the engine was just due to the rarefied atmosphere! The RPM indicator didn't show any overspeed so I left the prop at full pitch. 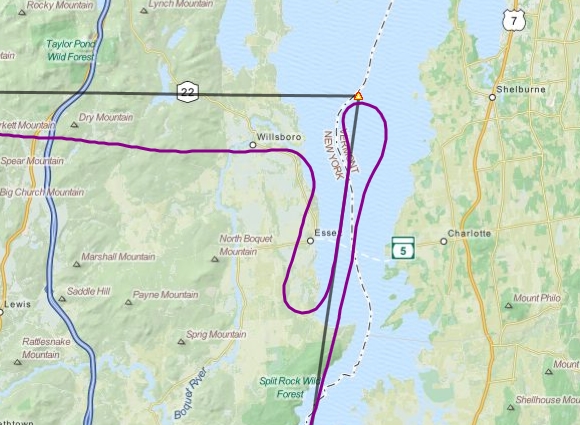 All the way to Saranac Lake VOR and onwards to Watertown VOR I would be flying through various MOAs. Most that I checked had floors well above me even at FL100, but one in particular had a floor at 100 feet, so I made sure to have Boston Center frequency on standby and tuned to that when I approached the area. Again, there's no simulation of MOA activity in FSX but I like to keep things as real as possible. I originally planned to go direct to Watertown from Saranac Lake but that would have taken me through restricted airspace and thus I was forced to follow the 249 radial out of SLK until I intercepted the 282 radial from ART. 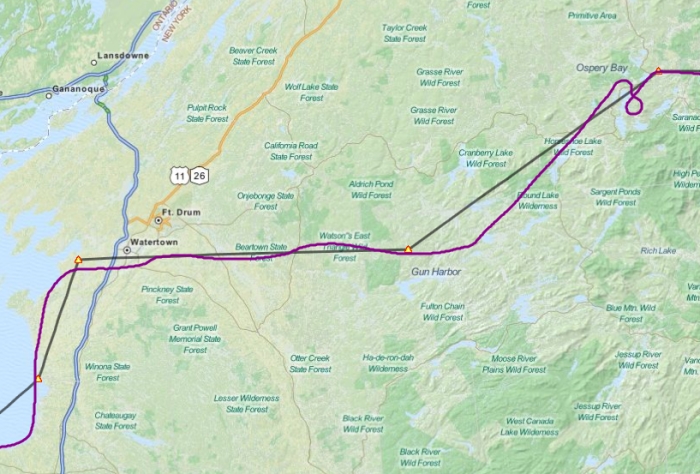 I strayed a little off the path however past SLK after I did a spiral descent back through another gap in the scattered overcast to get back down to the deck now that the land had flattened out and the Adirondacks were behind me. I knew there was some more overcast weather coming up and there's certainly not many things worse than being stuck on top of clouds while flying VFR. That and the wind pushing me off course was giving me fits correcting for. I over-corrected and ended up on the north side of my westward track, which was where I certainly did not want to be as that was the side nearest to the restricted airspace. Once past ART it was back to hugging the shore of Lake Ontario past Oswego and Rochester - I transitioned the Rochester Delta airspace since I couldn't climb high enough to feel comfortable cutting across the bay. The weather was crappy around Oswego with overcast skies and about 9sm visibility but cleared back up to scattered clouds and around 15sm visibility approaching Rochester and stayed mostly that way through to Niagara. 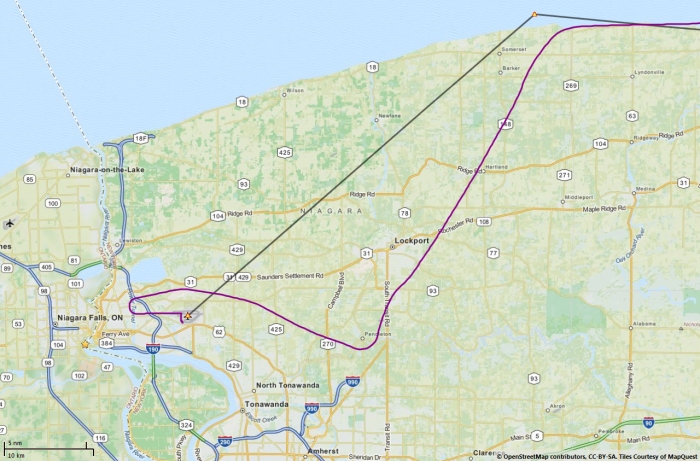 To set me up on approach to KIAG I planned to turn to heading 240 after intersecting the 20 radial from the Buffalo VOR. It's hard to get this wrong, considering that 24 is a numerical marking on the OBI and beforehand I had set the heading bug over it to make sure I knew what direction I had to head in. You can see I turned around the right time but somehow I ended up tracking roughly 223, which brought me towards KBUF instead. I realized this as I passed over North Buffalo Suburban airport, which I recognized from my last flight out of the area, and spotted KBUF almost directly ahead of me. So what went wrong? I know positively that I was pointed at heading 240 on my OBI - the only thing I can think of is that I was a victim of gyroscopic drift (yes this is enabled in my Realism settings). I haven't done a lot of long haul cross country flying until now and have never gotten into the habit of checking my gyroscopic compass against my magnetic compass every now and then to ensure accuracy. Lesson learned! 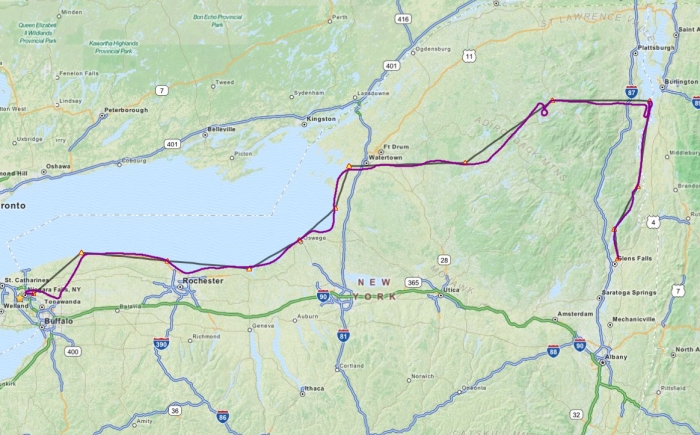 I still managed to make a decent approach and landing at KIAG without getting completely lost trying to find the airport, so in the end things didn't work out too bad. I managed to make it all the way back to Niagara and now I'm set up to continue my westward trek. But at the same time with this winter weather approaching I'd like to escape to someplace warm and tropical, so on that note I've also purchased my first twin engine aircraft and have a second throttle quadrant on the shipping truck headed my way. Happy days! You'll have to wait and see in the next week or so what twin I've bought but since this is my first twin I decided to keep things relatively simple and found the perfect plane to make the transition to multi-engine flying.