So my new throttle quadrant came on Friday, a lot sooner than I expected but hey no complaints! I expected it to fit right into my existing setup because I had one USB port remaining in the Pro Flight Yoke hub, but when I installed the drivers (after plugging it directly into the PC) and plugged it into the yoke the quadrant failed to show up in the taskbar so I could open it up in the profiler and assign button commands. The light was on, it showed up in the Control Panel but when I looked at its properties none of the axis or buttons responded. So I unplugged it and fed the cable through the back of the desk and down to connect directly to my PC again and that worked. A minor annoyance. After that I was able to program the buttons and I swapped around the axis knobs to match the layout of the twin aircraft I had purchased. 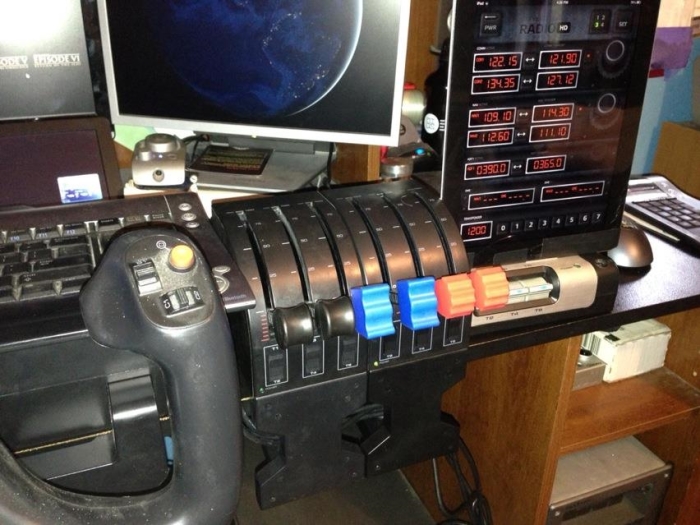 So the aircraft I ended up buying was the Carenado Cessna SkyMaster 337H centerline twin. I had a feeling it was the kind of aircraft I was looking for and Ray Marshall's review on AVSIM told me that I was right. While it's awesome having redundancy when flying, a normal twin engine aircraft with propellers to either side can give you all sorts of trouble when one of the engines quits on you. Your thrust is now offset and the aircraft wants to roll and yaw - so even after you've shutdown the engine (if it didn't just flame out on its own) and feathered the prop now you have to bank into the active propeller and hold the rudder all the way to the nearest airport and then land like that! With the centerline twin, when one engine cuts out you're simply back to flying a single engine aircraft. Of course, the centerline twin does have its own issues. For one thing it's not quite as immediately obvious as a normal twin when an engine fails if it happens to be the rear engine since you can't see it and the plane almost flies as it was with two engines running. This isn't a big deal while in flight (or even when landing depending on the circumstances) but on takeoff it's a huge problem as the craft is not certified to takeoff on one engine and when taxiing it's even harder to tell when the rear engine quits on you. For this reason the normal procedure is to simply shut down the front engine when you taxi, and use the rear prop only. It's really weird to be honest, rumbling down a taxiway and staring at an unmoving propeller in front of you! But also kinda cool in that "hey, look at me!" sorta way. Additionally, it's normal procedure to begin the takeoff roll on the rear engine only to confirm you have power before adding power from the front engine. It's this kind of unique operation that attracts me to an aircraft.

Taxiing for takeoff in the C337 I found the aircraft to handle way better on the ground than my usual V35B and even better than the default C172. Unlike the V35B where you line up the taxi line over the attitude indicator to stay centered, the C337 is a bit wider and you have to line up the taxi line over the upper-right screw holding the attitude indicator to the panel. I followed the procedures outlined in the manual that came with the aircraft and everything played out as it should from taxi to takeoff. Climbing out of Opa-Locka Executive (KOPF) I raised the gear and saw the effect the huge gear doors had on my climb performance before the aircraft cleaned up - definitely something to remember. I'm used to just waiting until I run out of runway in the V35B to lift my gear but in the C337 it's best to make sure you're clear of any obstacles before you do so lest you lose altitude on your climb thanks to the drag induced by the gear doors operating.

So for the shakedown cruise I didn't look to follow much of a flight plan or adhere to any proper airspace clearance - I just wanted to get the aircraft off the ground and back on the ground in one piece - it can really be difficult to do when you're trying to figure out how the airplane handles and what gauges are where and what buttons do what. Thankfully the handling issue wasn't an issue because the aircraft flies smooth as silk. I was trimmed out and cruising hands-off in no time. Going into shallow turns and tight banks was like whipping around curves on a race track. She doesn't get up to speeds much faster than the V35B but still somehow feels more nimble.

Approach and landing was alright. I had no problem getting the aircraft configured for landing and the approach was good but just over the runway things got a little squirrely and I ended up landing on my left rear wheel, right rear wheel and then nose wheel. So a little tipsy but no real damage. I had a notch of flaps and came in just over the touchdown markings. Floated a little - it takes a lot of landings to get used to how high off the ground you are when you are that close to it.

The backdrop to my flight was the wonderfully detailed Miami City X 2012 scenery from Drzewiecki Design - thankfully this one didn't cause me any OOM errors and the need to switch to DX10. I will be staying in Miami a bit longer to get further checked out on the C337 before starting my tour of the Caribbean. In the meantime I'll be catching up on my reading for twin engine operations from PC Pilot and PC Aviator magazine articles. I have some helicopter flights planned for both Miami and Niagara and the V35B will continue to move out west...
Sign in to follow this
Followers 0