So the good news regarding my throttle quadrant issue from the last flight is that it's not broken. I noticed the same issue when I swapped it for my newer quadrant and that led me to think of other problems, which eventually made me realize that one of the adjustable controls on my X52 HOTAS was to blame. Specifically it was the wheel that I use to control the throttle on the Bell helicopters, and to do that it is set to the propeller pitch axis. D'oh! But good to know I don't need to spend another $70 on a new quadrant.

I did a lot of prep for this flight, like making sure that I had scenery that would be useful along the way. I noticed I would be flying right past Cedar Point, which contains an amusement park, and I managed to find some scenery that put some simple 3D objects in that area. It wasn't anything sophisticated but it did make it easy to spot while flying for a landmark reference. I've been to the park before and it does indeed have some amazing roller coasters.

I also made sure that all the airports I would tune to for traffic advisories along the way had spoken names, not default phonetic ones, and used EditVoicepack as necessary to ensure this. It's a lot harder to remember the airport designations when flying along and listening to see of there are any arriving/departing aircraft I may need to look out for. While mucking around in EditVoicepack I thought about the fact that CTAF transmission are pretty poorly rendered in the sim. I don't know why I never put much thought towards this before but it's true. Aircraft don't say their type and they don't repeat the name of the airport at the end of the transmission. These are pretty standard rules, to my understanding, so I was surprised to not find any voicepack mods for this in either the AVSIM or flightsim.com download libraries. So of course I just figured out how to do it myself. It's available on the AVSIM library.

I also imported some additional phraseology mods I stumbled across on my search for the non-existent CTAF mod. You can find more on that and the Ohio scenery in my FSX Installation and Tweaking Log. 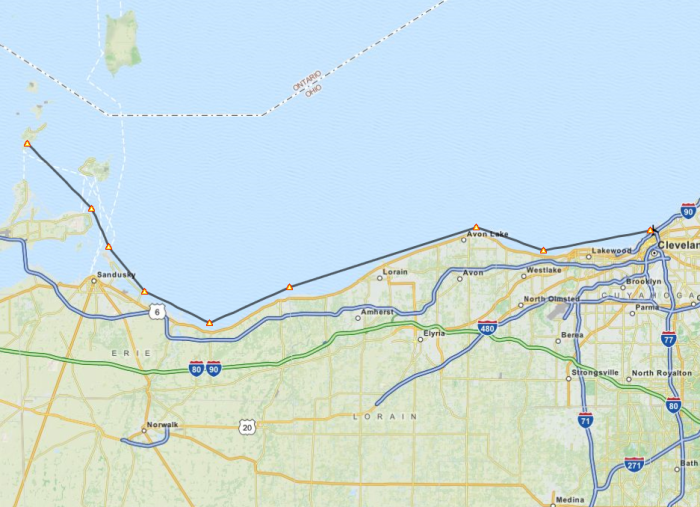 I decided to hop into the Beech Staggerwing produced by Alabeo as I hadn't flown it in one of my flights yet, only for a review. It's a tail dragger, and I normally don't bother with tail draggers because they are a pain in the &@($* to handle on the ground and during take-off and landing but I'll make an exception in this case because the Staggerwing is just a beautiful aircraft and has one of those big rotary engines that just sounds awesome under power, with the deep thrum I can really feel through my subwoofer. It took me a while to get up and going - I wanted to be wheels up with the sun but first I had to troubleshoot the recurring propeller pitch issue, then I realized I never installed the aircraft since I last reformatted my system, and then when on taxi to the active I actually crashed into another aircraft! I don't know why Ground didn't tell me or the other aircraft to stop, like it usually does, but - BAM! So after I reloaded the flight and got ready to depart of course I had to wait a few minutes for the deluge of taxi clearance requests to fall off since the AI traffic reloaded with the sim... and then I just taxied in spot view. Screw it.

Anyways I finally made it into the air about an hour after sunrise and made my way west towards the Bass Island group out on Lake Erie north of Sandusky, Ohio. I kept her low and slow the whole way and it took me about 30 minutes to get out to the islands. On the way I monitored some traffic frequencies and checked in on the weather report before tuning to the CTAF for the airport on South Bass Island, Put-In-Bay (3W2), to see which runway was active. I figured 21, but turned out to be 3. There were three other aircraft arriving so I took a long swing around the islands before entering the pattern to give them time to land and get out of the way - especially because one said it was making for 21, not 3. What I didn't count on was to be on short final and find an aircraft positioned on the runway for takeoff! Honestly, unless I had paused the sim and set up for an external screenshot I probably wouldn't have seen it since by the time I was close enough to spot it I was too nose-high. Fortunately there is a displaced threshold so I still probably would have flown over it on landing had I not seen it. Not sure if it was going to start taking off I announced a go-around and swung back into the pattern. I checked the ATC window and saw no notification of the aircraft taking off so I just shrugged, swung back around and landed over it! Turns out the airport was poorly designed by the US Cities developers and I fixed it to allow aircraft to depart properly. 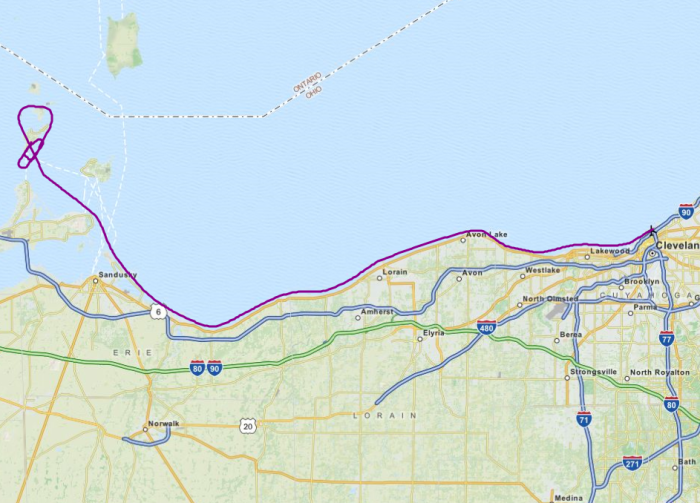 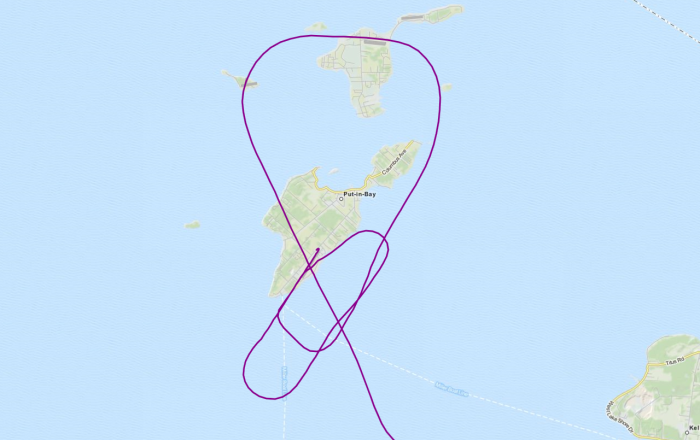 So in the real world after I parked and shut down I went off to bed for a few winks but my virtual self was off exploring the islands for the day until it was time to climb back into the cockpit for the flight home around 4pm. 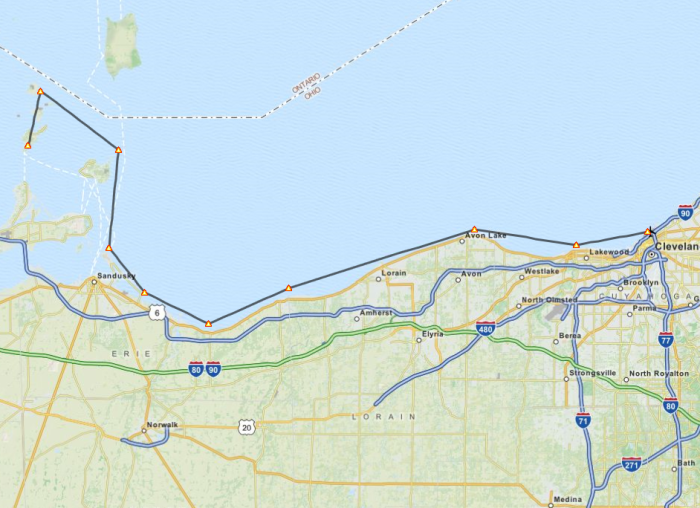 There was some more confusion on active runway use when taking off - the sock was pointing at runway 21 but I heard traffic coming in for runway 3 so I hustled to the hold short, rolled and took off from 21 while they were still 4 miles out. I flew back on the opposite side of Kellys Island but other than that the flight was essentially the same going as it was coming. Sandusky traffic was landing from the west so it didn't get in my way and I cruised around FL017 back along the shore of Lake Erie until I was close enough to get ATIS from KBKL and contact the tower for landing instructions. I was hoping they were also landing from the west so I could just fly straight in but instead had to enter downwind to land out of the east. Either way though it's really cool to be approaching from the west and flying past downtown Cleveland. I considered flying back to a different airport in the area covered by the US Cities scenery but the lakefront airport is just too cool to pass up - reminds me of Meigs in Chicago - RIP

I had a weird case of yawing almost uncontrollably off the runway shortly after touchdown and I still haven't really figured out why. I managed to stop before falling off a small cliff in the terrain mesh near the water and had a few good bounces taxiing back onto the runway. Would have really sucked to crash at the end of a flight. I'll have to remember to do a replay of my landing if that happens again - I wonder if it was from my tail wheel touching the ground while it was unlocked. I may have unlocked it too soon and should have slowed down further until I felt my rudder authority weaken. Again, not much experience with tail draggers here... 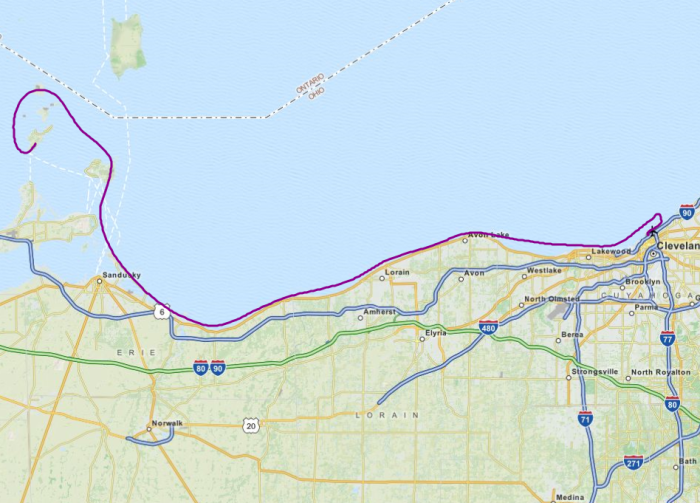 I've got ideas for two helicopter flights, one for the 206 and one for the 222 if I can find time to do them before the start of November in two days. Then it's down south for the winter!